I wish I could tell you that I woke up last Friday to super brown bananas, smiled, and casually decided to whip up a batch of banana muffins. I wish I could tell you that because it would make me seem so easy-going and calm. I’m really not that way, though. I like to plan things, what can I say. I knew I’d be seeing my boyfriend’s parents over the weekend and what better treat to bring them than a plate of cinnamon swirl banana muffins that just happen to be gluten free! So I planned. I bought the bananas a week in advance so they’d be brown and soft and sweet and perfect when I was ready to bake them.

Normally, a dense baked good wouldn’t seem appealing to me. But this is banana bread in muffin form, and you definitely want your banana bread to be dense and moist. And yes, healthy banana bread recipes exist. I’ve made healthy banana bread and muffins before, and they can be delicious, of course. But sometimes you don’t care about your muffins being particularly low-cal. You want them to be absolutely covered in a delicious cinnamon sugar mixture. It’s the holiday season after all!

These will be the dense, moist, cinnamon-sugary, gluten free banana bread muffins of your dreams. If, like me, you’re the kind of person who dreams of stuff like that.

The batter comes together quickly. You get to mash up 3 bananas in a ziploc bag (or however you want, really) which is easy and fast when they’re this brown, but also oddly therapeutic. The batter is thiiiiiick. So thick, that I actually added almost two tablespoons of almond milk just to make it a little more manageable. Use your best judgement on adding a little liquid like this.

I was so anxious to get these in the oven that I forgot to take a picture of them in batter form. Forgive me. But you’ll notice that beautiful cinnamon sugar swirl in the center of that muffin above. It’s a crucial, delicious component of these babies. You mix together some white sugar, brown sugar, and cinnamon. I made way too much and now have a sandwich bag full of the excess. I’m not mad about it. Note that in the recipe below, I’m giving you measurements to make half as much of it as I did. If you also want a bag full of excess cinnamon sugar, feel free to double the swirl ingredients! Fill each muffin tin about halfway. Then cover the batter with the cinnamon sugar mixture. I mean cover. I probably did half a tablespoon or even a bit more for each muffin. Then top with remaining batter, filling the tins almost to the top. Cover cover cover the top of the muffins with the cinnamon sugar. 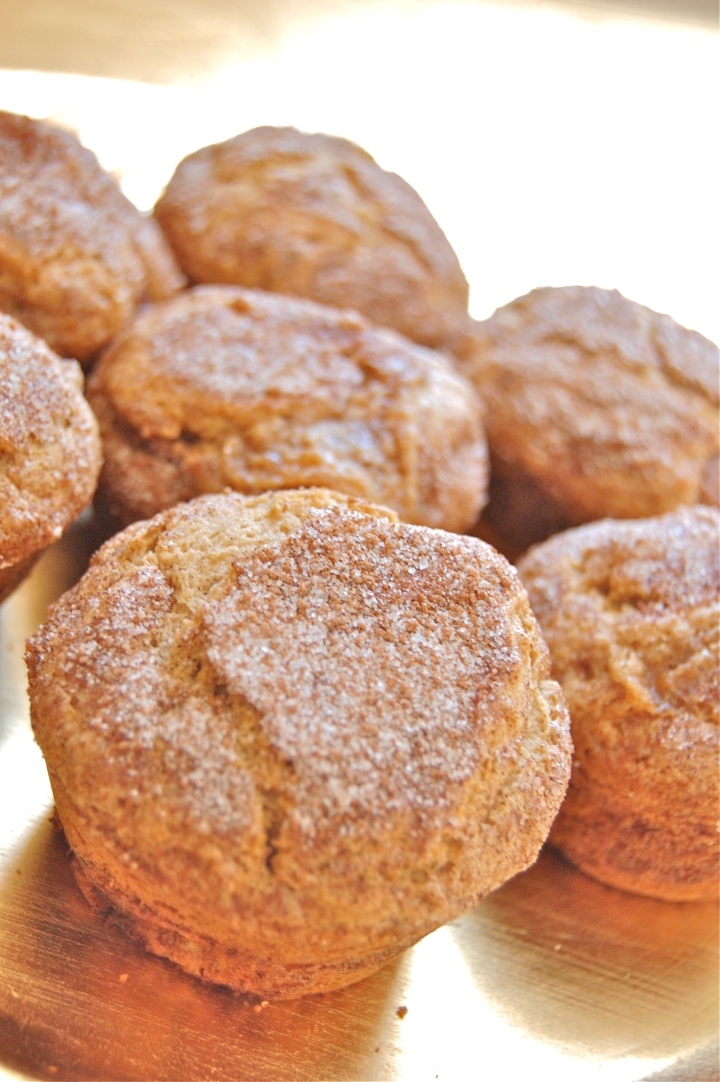 You can see I was not shy about the topping. 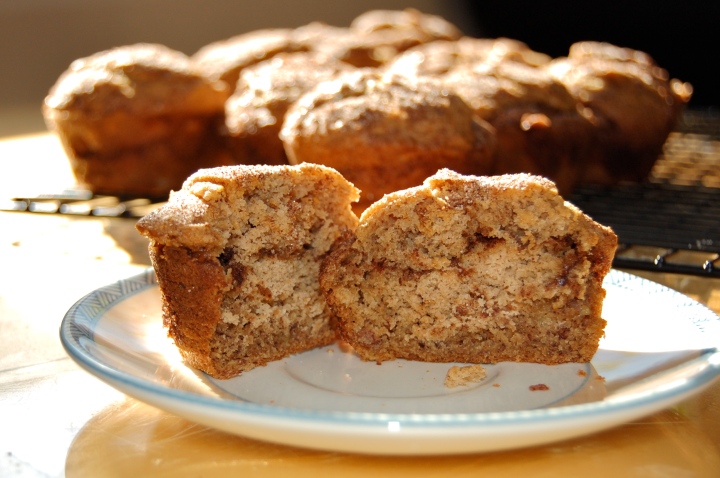 Look at that internal layer of cinnamon sugar. To die for.

Like most banana breads and treats of their kind, these get better after they sit for a few hours. This clearly did not stop me from eating one (or two) right after they came out of the oven, but let it be known that I would recommend waiting until they’re fully cooled and have had a chance to really grow into their full banana potential. 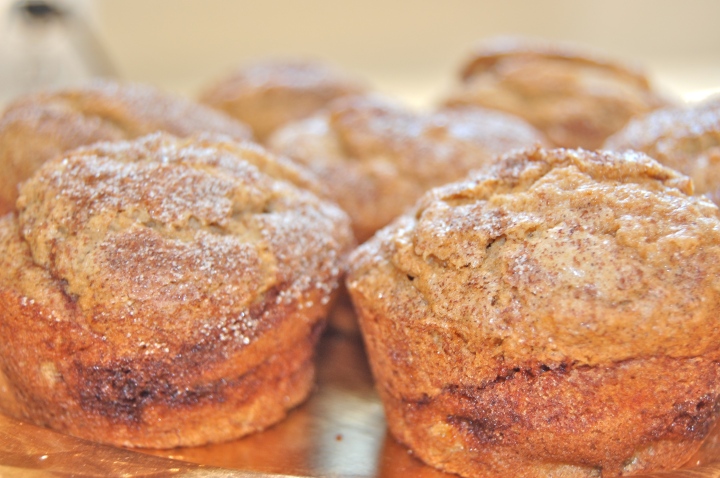 Directions:
1. Preheat oven to 350. Prepare muffin tins with nonstick spray.
2. Cream together butter and brown sugar until creamy. Add in eggs and vanilla and mix well.
3. In a separate bowl combine flour, baking soda and cinnamon. Slowly add into the mixer and combine.
4. Mash the bananas in a ziploc bag. Cut the tip of the bag and squeeze into the mixer. Mix to incorporate. Batter will be very thick! If it seems too thick, add up to 2 1/2 tablespoons of liquid (I used almond milk, but regular milk would be fine and vegetable oil would probably work, too.)
5. In a small bowl, make the swirl by mixing together white sugar, brown sugar, and cinnamon until they are well combined and no brown sugar lumps remain.
6. Fill muffin tins about halfway, then cover with swirl mixture. Top muffins with remaining batter, filling the tins almost all the way. Cover with more swirl mixture.
7. Bake for 22-25 minutes or until a toothpick inserted comes out mostly clean.
8. Let the muffins cool in the pan on a rack for 10 minutes, then remove from the pan and allow them to finish cooling.

Celiac with a knack for baking, a penchant for falling in love with every golden retriever I see, and a flair for experiential marketing. Believer that baking should be fun for everyone, no matter what their diet is.